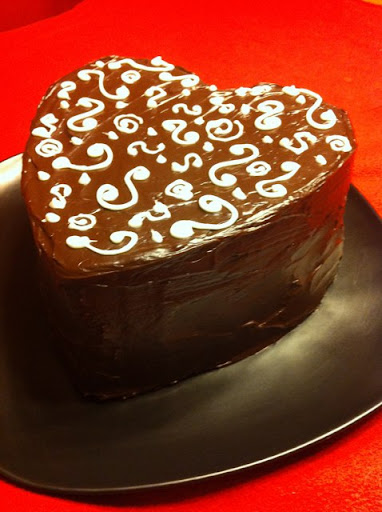 I would like to take a moment to thank Angela for this decadent recipe! It is the best chocolate cake I have ever made and possibly the best one I have ever eaten. I made it for Ross on Valentine's Day and it turn out great! He said it was restaurant worthy; which definitely means I will be making it again. Speaking of V-Day, my Sweets left 8 roses under the windshield wipers on my van, 1 rose was in my car seat being held by a Teddy bear (my childhood dream-that a boy would give me a Teddy bear holding a long stem red rose) and the other 3 roses he left in each of his daughters' car seats. There is a story behind the roses under the windshield. Not too long after Ross and I met, he left a single pink rose under the windshield on my car at work. There was a guy I worked with that was semi-stalking me so naturally I thought it was him. When I got off work, I went back to my dorm and told my friends who I thought it was from. After telling them, I went down to the main lobby (leaving the rose with my friends), and one of Ross' friends asked what was wrong. I said nothing, and he said, "Was it the rose?" I said, "What rose?!" He said, "The rose Ross put under your windshield." I said, "No, nothing is wrong." I quickly came up with a reason to leave and ran upstairs to tell the girls what happened, BUT when I rounded the corner, there it was! Ripped into a thousand tiny little pieces. The rose. All over the hallway floor. I gasped, explained what really happened, cracked up laughing and drove as quickly as I could to buy a replacement rose. I totally pulled it off too. Ross never knew...until I told him. Later. :) It made for a much better story to tell. I hope you all enjoyed your Valentine's Day!! Our family enjoyed a nice dinner at home with BBQ Pork Tenderloin, Gingered Purple Cabbage, and Crescent Rolls. I made Rice Krispie Treathearts for the girls. To make these, just make Rice Krispie Treats with Strawberry Marshmallows and cut them into heart shapes. Ross and I put the kids to bed and enjoyed our Decadent Double Chocolate Layer Cake, just the two of us. All-in-all it was a good day.

Posted by Ross and Lisa Green at 9:11 PM 7 comments