Ross, Abigail, Abigail's nurse, Patches the Bear, and I before her procedure. 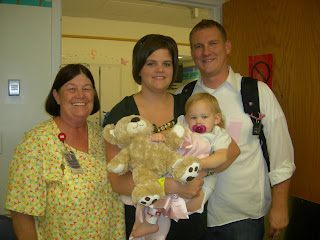 I'm holding Abigail as they are putting her to sleep in the O.R.. You cannot see her well, but thought you could get the idea. 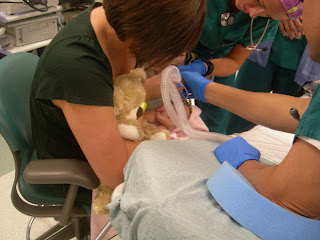 First and most importantly, Abigail's scope went very well. In fact, her esophagus looked better than it has yet. We will have the biopsy results on Thursday, but Putnum believes that she will be able to keep bananas in her diet. That would be a huge blessing! As we were giving Dr. Putnum our family history, we got to Hannah's and he asked if she had ever been scope. We said no, and long story short he felt that we should, and he would like to do it the next time we bring Abigail...so it looks like there will be many more trips to Cincy. As for Hannah, Ross and I still have some praying to do about that.

Now for the not so good news. While she was in recovery Ross and I were talking to the nurse and found out that they gave her Decadron (a steroid) during her scope. This is a problem because she is supposed to be off of steroids for one month prior to the allergy patch testing. We talked to the allergy nurse and because Decadron only stays in her system for 12 hours, she thinks that they will still be able to do the testing. The good news is that it will not affect the skin prick test, so they will at least be able to do that test without any problem. We will find out about the patch testing in the morning. Although this was all very frustrating, Ross said that all the Lord kept "saying" to him was, "I am in control, I am in control." We know that no matter the outcome, He is in control and that is the best for Abigail. Besides all of this excitement, the hospital was amazing. I wasn't able to take pictures today, but I will have some later on this week.

Prayer Requests: Tomorrow's skin prick tests will be difficult; pray for strength for all of us. Pray that if we are supposed to do the patch testing now that all will go as planned; and if not, that Ross and I will have peace that now is not the right time.

Posted by Ross and Lisa Green at 7:37 PM

I'm glad the scope went well...everything with Han will work itself out.
I'm praying for you!!