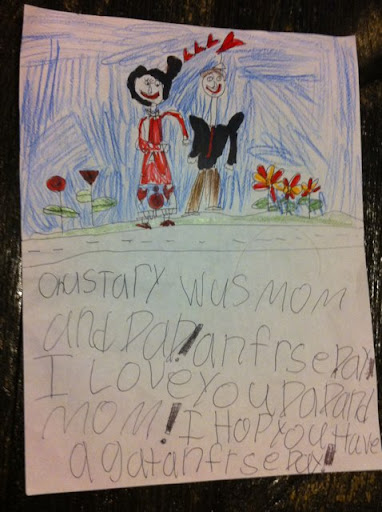 Saturday Ross and I celebrated our 11 year wedding anniversary. It started out with the above pictured anniversary present from Hannah: It read, "Anniversary was mom and dad! Anniversary day! I love you dad and mom! I hope you have a great anniversary day!" That really could be the best anniversary gift ever! Thank you, Hannah, your gift was extremely thoughtful. It was perfect. The not so perfect part? Ok. This is a little involved. Sarah had surgery on an abscess two weeks ago and the doctor said he did not believe it was staph and not to worry about it. He drained the abscess and sent my sister on her way without any antibiotics or specific instructions. Well on Friday, mom had a place on her leg that she thought was a bug bite that started looking really badly. After going to the doctor she learned that Sarah did in fact have a staph infection and now she did too. Shame on the doctor who did the surgery for dropping the ball big time and not following up on the culture and shame on Washington Regional for not making it known either. Thankfully there are two other hospitals in the area that gives patients options. My family has already made the decision to avoid WRMC and MANA whenever possible. Ok, so back to Saturday...mom is sick and in pain with staph and daddy has the stomach bug which now means we have no babysitters on our anniversary. Luckily, Austin was around to save the night. He came to the house to watch all four kids until Blair got here to help him out after she got off work. Thanks guys, it was great of you to sacrifice your Saturday night to help us out!

Ross and I went to Noodles for dinner and planned on walking around the Square in Fayetteville and looking at Christmas lights, but mom called as soon as we were done eating and needed us to look at her leg. It looked really bad so we took her to the ER (remember dad couldn't; he was sick). Aunt Debi met us there because we had to get home to feed Jonathan. Mom ended up having her wound lanced, drained, and packed. They also gave her an IV antibiotic and she had to go back Sunday to do it again. Needless to say out night out was interrupted by more important things. What an Anniversary, hopefully next years will be better. Love you, Babe. At least we were together!

This brings us to Sunday. We had to get going early. MG and Han were singing with XLR8 as part of this years Christmas program; so they had to be there by 8:10. I did not want to get up...nothing like the kids' performance to hold you accountable ;). Long story short, I ended up sitting in the ER with Sarah all day because she needed an IV antibiotic to stop the staph from spreading even more than it already had. Needless to say, this was a whirlwind of a weekend.

Posted by Ross and Lisa Green at 3:24 PM