I have to say a BIG thank you to Mandy! She watched Mary Grace and Hannah for Ross and I while we went and looked at a few houses in Siloam. When we picked the girls up Hannah was going 90 to nothin' in every direction. Now, she is my child that hits the floor running from the moment she wakes up, but she was really wound up. I don't know if it was from the excitement of getting to play with Alex and Emma or if it was the new puppy. I think it was most likely the later. That is all she talked about; the little puppy this and the big puppy that, giggling like I have never heard. What was in those hot dogs?? ;) Han was so wound up we ended up putting the girls to bed 30 minutes early just to get them both to calm down. She must have been exhausted because they never talked or got out of bed; not even once! Any of you that know Hannah, know that's a miracle in and of itself. That child just doesn't require much sleep. Just last week it was 10:45pm and Ross said, "Is that Hannah still awake?" Sure enough it was!

Now...I hope it doesn't sound like I am complaining or being negative describing my four year old; I'm not. Hannah is my strong-willed child with a beautiful personality. Although she is stubborn, she is equally compassionate. She is emotional in every aspect of the word, but that is why she has such compassion for others and animals as well. I call her my little sunshine because the moment she walks into a room, she lights it up. She is so expressive that she has has a way of even smiling through her eyes. Here is a pic. of my Hannah! 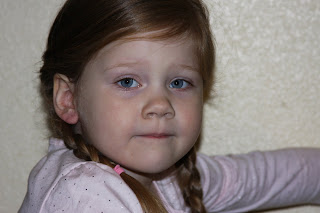